At a distance of 18 km from Mahabaleshwar, 48 km from Satara, 104 km from Pune and 254 km from Mumbai, Panchgani also called Paachgani is a famous hill station and municipal council in Satara district of Maharashtra. It is one of the top hill resorts near Pune & among the best places to visit near Mumbai. Panchgani is one of the popular Tourist places in Maharashtra and among the must include places in your Maharashtra tour packages. Situated at an altitude of 1334 m, Panchgani is bordered by Wai, Bavdhan and Nagewadi dam in the east, Gureghar in the west, Khingar and Rajpuri in the south and Dhom dam in the north. Panchgani is nestled at middle of five hills in the Sahyadri mountain ranges, also there are five villages around the Panchgani which are Dandeghar, Khingar, Godwali, Amral & Taighat. Panchgani is among the must include places in your Mahabaleshwar tour packages. The town was discovered by the British as a summer resort in 1860s. Mahabaleshwar was the summer resort of choice for the British, but it was uninhabitable during the monsoons. Panchgani was developed as a retirement place for the British as it remained pleasant throughout the year. John Chesson, a British superintendent, was responsible for the transformation of Panchgani into a summer resort. It is also said that, during Vanavasa, the Pandavas spent some time in Panchgani and the cave where they stayed is the famous Devil's Kitchen. Panchgani has several beautiful tourist attractions. Table Land, Parsi Point, Kamalgadh Fort, Devil's Kitchen, Rajpuri Caves, Sydney Point, Mapro Gardens, Dhom dam etc. are some of the major sightseeing options in Panchgani. Panchgani is dotted with British style old bungalows and Parsi houses. It is also known for many residential educational institutions and a favored destination for health resorts. Pune International Airport is the nearest airport, which is about 111 km from Panchgani and has daily flights from Mumbai, Bangalore, Hyderabad, Chennai, Kochi, Delhi, Kolkata and Goa. Satara is the nearest rail head, which is about 52 km from Panchgani. It has trains from Goa, Delhi, Mumbai, Pune, Hubli, Kochi, Kolhapur, Tirunelveli, Mysore, Pondicherry, Bangalore, Ahmedabad, Gorakhpur, Ajmer and Jodhpur. Panchgani is well connected by bus with Mahabaleshwar, Mumbai, Pune, Satara, Bangalore, Goa, Ahmedabad and Shirdi.

Top 1 Places to Visit in Panchgani 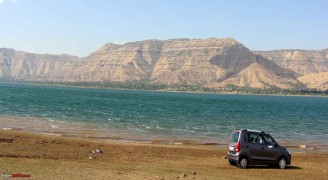